It seems like every week in the world of vegan food news is more exciting than the last and this week is no exception. Lightlife has just announced its biggest partnership yet with Disney and Pixar to promote its Light year film. Beyond Meat is moving closer to price parity with beef by launching its Cookout Classic bulk packs in 10,000 stores. Vegan bun hits the shelves at Trader Joe’s. And British brewery BrewDog has just made a tribute beer to meatless meat maker Quorn. Read on to find out more.

Of course, pairing (plant-based) chicken wings with beer is nothing new, but beer inspired by meat without meat? It’s not something you see every day…until now. British brewery and pub chain BrewDog has teamed up with Quorn, which makes meatless meat using mycoproteins, to create the dry-hopped Mexican Vienna Lager. Brewed specifically to accompany Quorn’s meatless meats, the limited-edition beer is part of the BrewDog and Friends June subscription box.

“Quorn is a pioneer in the food game, their ongoing work to create a better future for us and the planet makes them the perfect partner for a bold new brew,” Lauren Carrol, Brand and Marketing Director at BrewDog, said in a report. “We like to let our BrewDog and Friends subscribers guess what we’re going to serve next, and this beer is unlike anything we’ve done before. We can’t wait for fellow punks and Quorn fans to try it alongside the Quorn burger.

And although this beer seems to be the only thing that unites these two companies, they share an important common bond: brewing beer and making Quorn involve the magical process of fermentation. 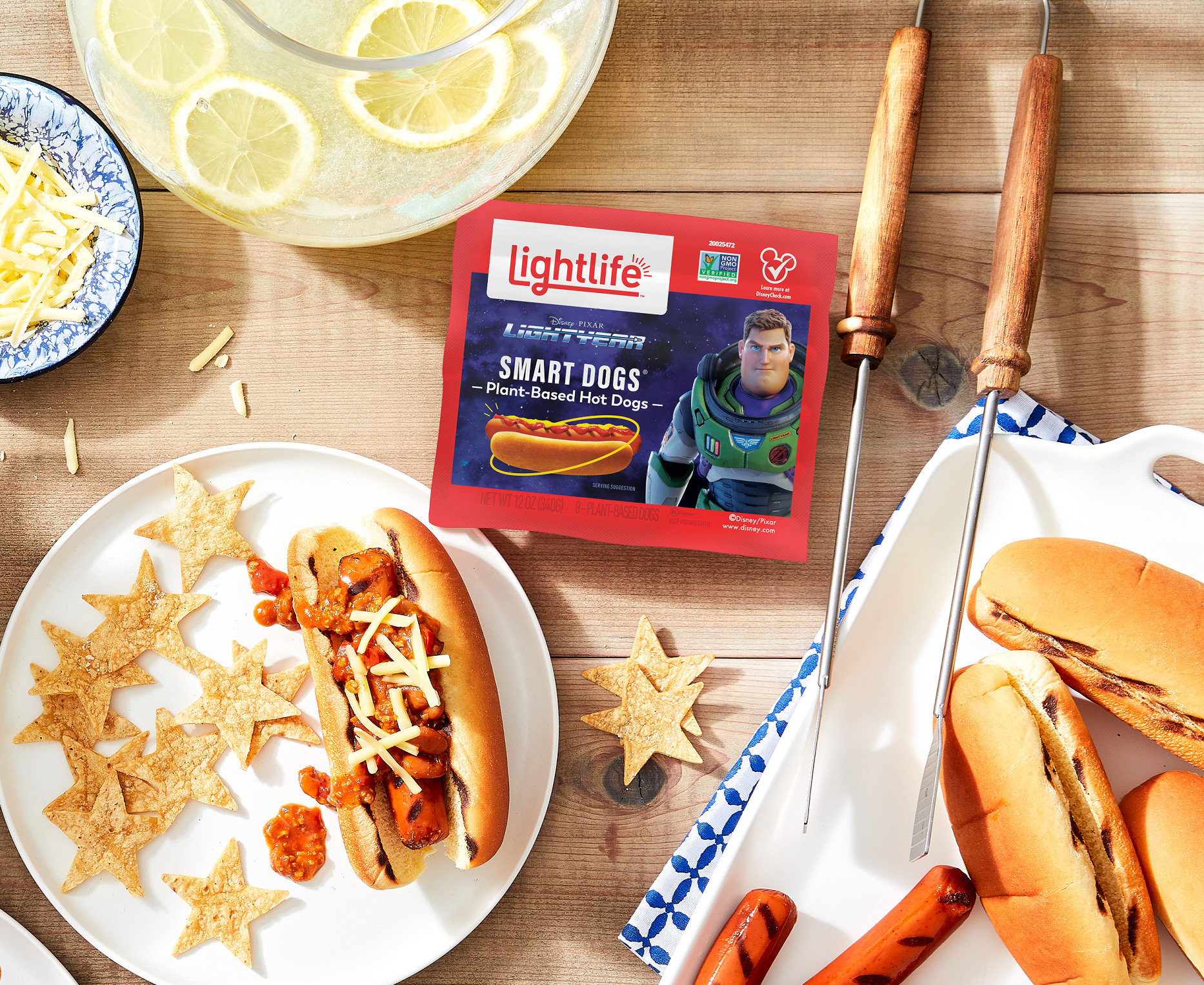 “Our collaboration with Disney and Pixar marks the largest brand collaboration in Lightlife history and we are extremely proud to be the exclusive plant-based sponsor of a film whose fan base spans generations. “said Adam Grogan, president of Greenleaf Foods, SPC in a statement. “We’re thrilled to have Lightlife’s family-friendly plant-based products teaming up with Disney and Pixar’s release of the film this summer.”

To infinity and beyond!

Beyond Meat knows summer is all about grilling, and their vegan Beyond Burgers are an absolute must-try. And this season, the brand’s vegan burgers are getting cheaper so you can feed everyone on the barbecue for a whole lot less. Beyond Meat introduced its Cookout Classic at Target and Walmart stores during summer 2020 as a limited-time offer and is offering a version of the bulk pack in an additional 10,000 stores this summer. When you crunch the numbers, each 4-ounce Beyond Meat patty in the Cookout Classic 8-pack will cost around $1.99. That’s getting very close to the price of beef, whose nationally advertised price was around $1.45 per 4-ounce serving this week. 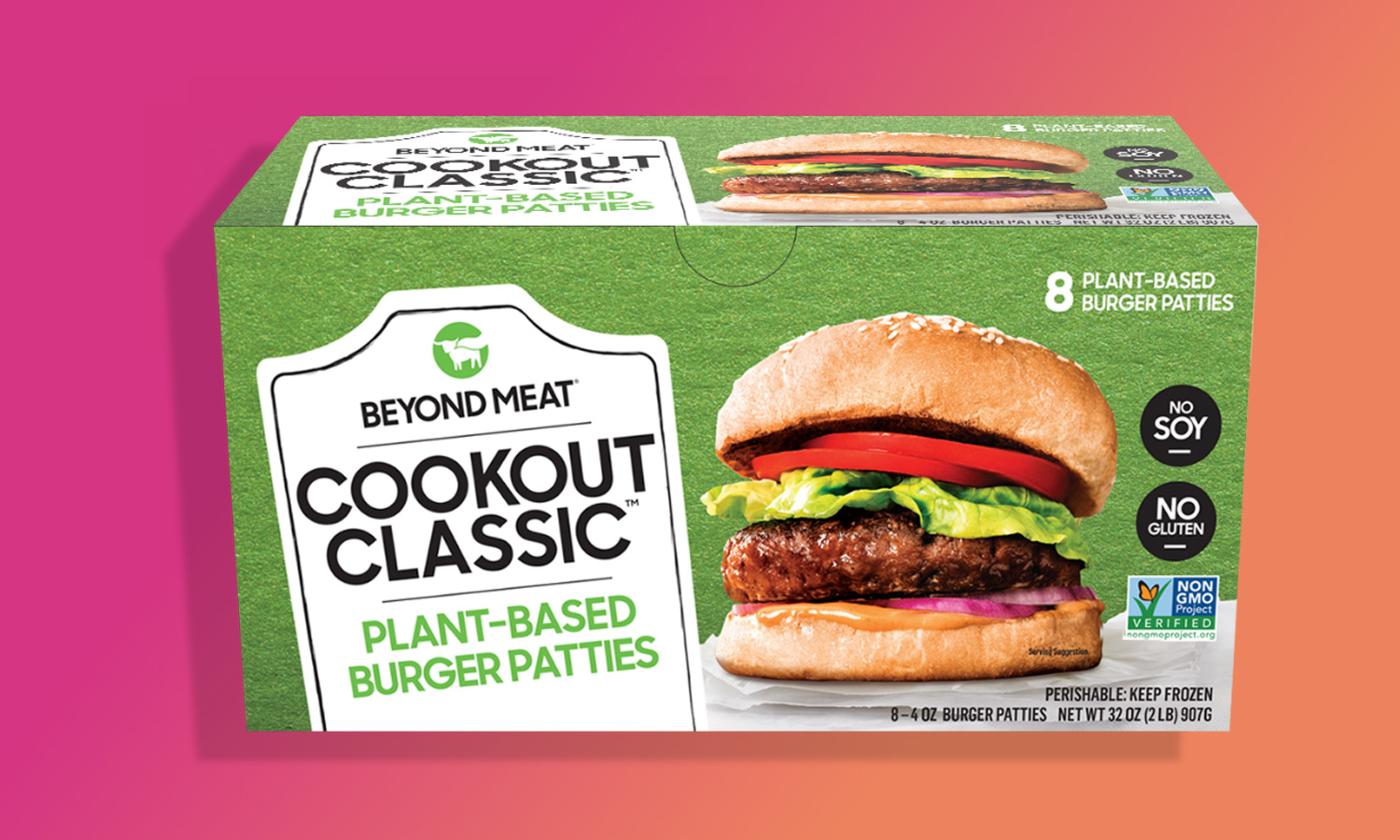 And while we already know the benefits of eating vegan burgers over animal flesh, a price drop only makes the plant-based choice easier, especially when meat prices continue to soar. Created to inspire the whole family to go plant-based, you can now find the Cookout Classic Pack in the refrigerator aisles of Kroger, Publix, Sprouts, Target, Walmart, Wegmans, Whole Foods Market, and more.

Mini-chain Tacotarian is a vegan mainstay in the Las Vegas area and has found fans everywhere, including Vice President Kamala Harris who, on the recommendation of Senator Cory Booker, stopped by a store l ‘last year. At Tacotarian, Harris stocked up on tacos stuffed with vegan carne asada to fuel her then “vegan before 6 p.m.” lifestyle.

Las Vegans have the luxury of visiting Tacotarian anytime they want for their fill of VP-approved meals and San Diegans will soon have the chance to make Tacotarian a local favorite as well. That’s because the store’s fifth location — its first out-of-state outpost — is set to open in early July in San Diego. Tacotarian will take over a spot previously occupied by vegan restaurants Chicago Not Dogs and The Modern Vegan in the North Park area, where it will serve its famous tacos, flautas, quesadillas, desserts and more, as well as specialty cocktails. 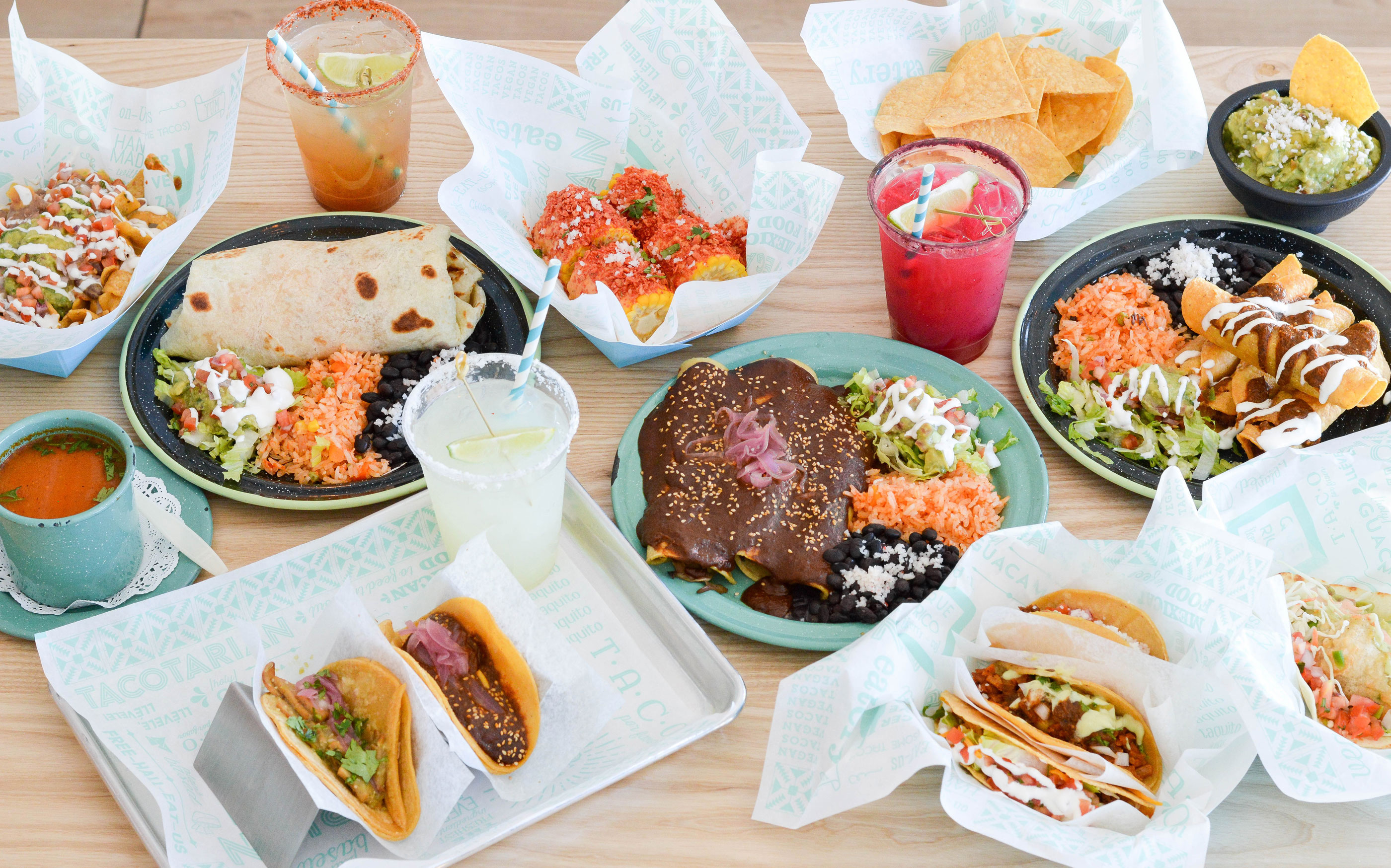 Tacotarian was founded by two married couples – Dan and Regina Simmons and Carlos and Kristen Corral – after being inspired by a trip to Regina’s hometown of Mexico City. “We’ve been watching California for a long time,” Dan Simmons said in a statement. “We were very lucky with this place because it’s in an amazing central location and we can’t wait to share our food with San Diego. People have wanted us to come to California since day one, so it feels good to finally be on our way.

Bread doesn’t usually make the headlines, but Trader Joe’s knows how to stir up excitement around things usually reserved for a quiet lunchtime sandwich. The new buzz at Trader Joe’s is around its Vegan Brioche Loaf. Indeed, brioche is a type of bread that usually contains both eggs and dairy products. However, Trader Joe’s delivered on its promise to introduce more plant-based items with the launch of this bread, which replaces animal products with dairy-free milk and vegan eggs. 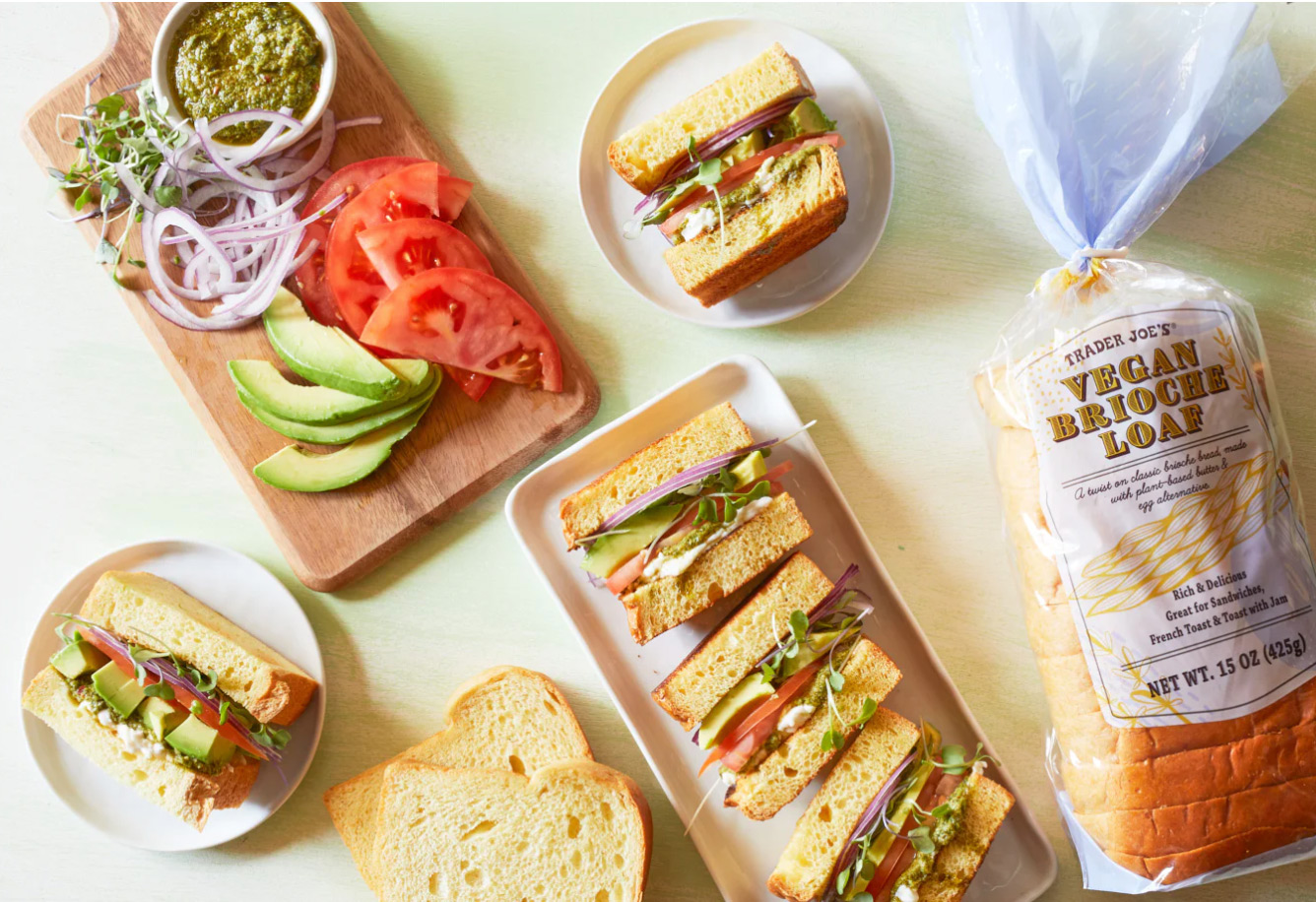 “Rich, moist, and full of buttery sweetness, a good bun is as elegantly delicious to eat as it is difficult to make — and it’s even harder if you’re making a totally vegan version,” Trader Joe’s describes on its website. . “Luckily, we know some of the best bakers in the business, and they’ve baked a pre-sliced ​​vegan brioche bread exclusively for us, which is worthy of being the crown jewel of any bakery, vegan or not.”

We think it’s time for French Toast? Or maybe bread pudding? Both? Thanks, Joe.

For the latest vegan news, read:
How Chris Paul made his dad eat a vegan egg
Kevin Hart is opening a vegan chain to transform the fast food industry
Burger King opens 2 meatless locations in Switzerland