A sad closing occurred at the end of July but was not included in the August dish – Pie & Mighty on Chicago Avenue. We’re really sorry to see them go. Another big favorite that closed recently, not so close to home, was Mort’s Deli in Golden Valley.
Racket had a great article on the recent rise in BIPOC-owned cafes. Read it here for the details I don’t have room for! racketmn.com/a-wave-of-bipoc-owned-coffee-shops-change-the-face-of-twin-cities-coffee/
One of the places mentioned, Cafe Abogados in Como Park, has an interesting history and is a place I want to visit soon. A second, Mocha Momma’s, is another I was looking forward to and finally got to visit a few weeks ago. It’s in the old Dunn Brothers space of the Minneapolis Central Library. A third is Forreal Coffee in George Floyd Square, which is covered in the Chicago Avenue section of this month’s Powderhorn issue of Southside Pride.
Racket also took a deep dive into all the new foods at the State Fair this year, categorizing them as Scarf, Shrug or Skip, while the Sahan Journal (sahanjournal.com) focused exclusively and positively on new Hmong foods at the State Fair. The Beer Dabbler (beerdabbler.com) has an article highlighting seven local summer brewery debuts.
Finally, not a new location or a new concept, but a new product announcement from Bebe Zito, Uptown’s innovative ice cream shop. Due to the recent legalization of non-medical THC, Bebe Zito has mixed Delta-9 THC gummies into his “Pineapple Express” pints to become the first local cannabis ice cream supplier. I have no idea what Delta-9 means or how you put THC into a candy; I’m just trying to keep up with the cool kids here. 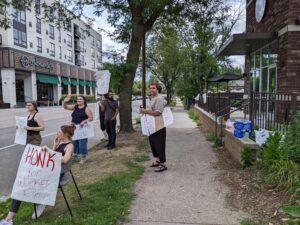 The Starbucks on Cedar and 47th had a 2 day strike in August.

Unionize in more Starbucks and a Trader Joe’s

Other Starbucks stores have announced upcoming union elections or elections held and mostly won, and as we go to press on Aug. 30, the unionized (but not yet contracted) store at 4712 Cedar Ave. staged a one-day strike to protest Starbucks. retaliatory tactics. The latest was to grant raises to all non-unionized staff while freezing the salaries of unionized members. Don’t cross the picket line if you see one in the future and pass the PRO law to improve worker protections.
Trader Joe’s in downtown Minneapolis became the second JW in the nation to vote for unionization. The vote, in the second week of August, was 55-5! The online journal minnesotareformer.com contains more details of Trader Joe’s conduct:
“Minneapolis workers will be represented by Trader Joe’s United, an upstart union started by workers at a store in Hadley, Mass., which 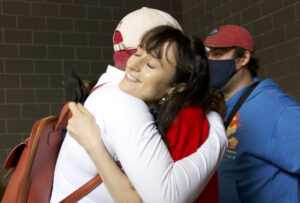 became the first to syndicate a Trader Joe’s [in July 2022]. Workers at a Trader Joe’s in Boulder, Colorado, also filed for a union election, but with a well-established union: United Food and Commercial Workers. UFCW represents grocery store workers across the country, including in Minnesota at Kowalski’s, Cub, Lunds & Byerlys, [several food co-ops] and other stores.

In August and September, a fun celebration of vegan food in cities is presented by the animal rights organization Compassionate Action for Animals (CAA). Throughout August, restaurants across the city are participating in the Vegan Chef Challenge. Restaurants, whether vegan, vegetarian or omnivorous, present a special vegan dish as an entry to the challenge. Diners who try the dish complete rating and voting forms, rating the dish on a scale of 1-5. They also share their thoughts and photos on social media and each rating or share is an entry into the daily draw for free meal coupons. The restaurant with the highest vote total wins the annual award.
Then in September there is VegFest. You might as well call it VegFeast. It’s an outdoor festival offering free vegan food, with information booths from many vegan makers and restaurants. This year, the Fest will take place on Sunday, September 18 from 10 a.m. to 4 p.m. at Harriet Island Park in St. Paul. Get more information at www.exploreveg.org/events/twin-cities-veg-fest-2022. 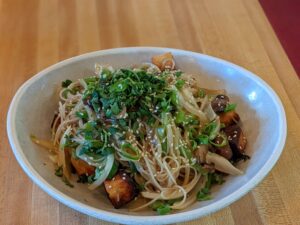 I had big plans for the Vegan Chef Challenge. I was going to try 10 dishes and post pictures of each with a comment and vote on them, but only made three.
The three vegan meals I sampled were:
• Philly Cheese-Fake Pizza from Parkway Pizza.
• Tiny Diner Sesame Glazed Tofu.
• Reverie’s Korean BBQ Simulated Duck Tacos.
Parkway Pizza already offers a number of vegan specialty pizzas, as well as a number of vegan “meat” and “cheese” options for BYO pies. A friend and I shared the pizza, and even then we didn’t finish it. The pizza was slightly disappointing, but I brought some home so I must have liked it at least a little. There was nothing really wrong with that, but it was kinda ok. Very reminiscent of the ‘real thing’, the cheese and steak sandwich, which I also consider blablabla. 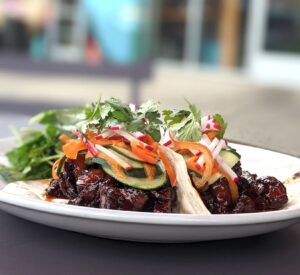 I asked our server what kind of vegan cheese and vegan ground meat it was, and she said it was from Herbivorous Butcher. This was an understandable mistake, as most of the vegan options on their menu were from HB, but when I later saw a fuller description of the Philly Cheese-Fake, it said the ‘meat’ was Impossible Burger and the “cheese” was Cross Your Heart. I’m a strong supporter of Beyond Burger in the vegan burger wars, which is perhaps why I’m disappointed.
I also had what was supposed to be a “Strawberry Daiquiri” cider from Sociable Cider Werks but even though it was pink in color there was no detectable strawberry flavor, just a strong dry cider flavor with a hint of lime. Pleasant enough, but not as advertised.
Not as advertised sums up my experience at Tiny Diner too. Again, it wasn’t bad, it was just less than I expected. The name of the dish was Sesame Glazed Tofu. I expected the tofu to be frozen,
that is, having a shiny or sticky coating with sweet and sour flavors and 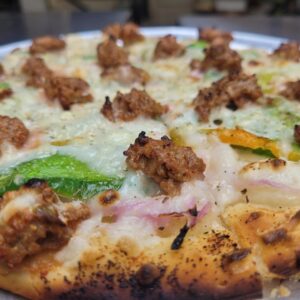 sesame seeds clinging to the surface to add a nice texture. The tofu cubes were not glazed. They were very well browned
no perceptible coating and no seductive flavors. The sesame seeds were raw and just sprinkled over the dish as a garnish. Also, there were plenty of noodles and a minimal amount of vegetables. It should have been quite high in protein, as two of the vegetables were mushrooms and edamame. I didn’t hate it, but I didn’t finish it either. I’ve had much better dishes at the Tiny Diner, even much better vegan dishes. I don’t really think their heart was in this competition.
My final Vegan Challenge dish was from the all-vegan Reverie Cafe and Bar. Their dish looked weird but turned out better than expected when executed. The Korean BBQ Mock Duck tacos looked too much like a fusion. In execution it was like a low carb banh mi. The barbecue was Korean style, with lots of heat, but not overwhelming. The tacos were the mild variety. Along with lots of faux duck, they had the usual crunchy, leafy bits you get in a banh mi – radishes, shredded carrots, quick-pickled cucumber, and cilantro. I had it with fries and vegan aioli and iced herbal tea. I scuffed every stitch and was perfectly satisfied.